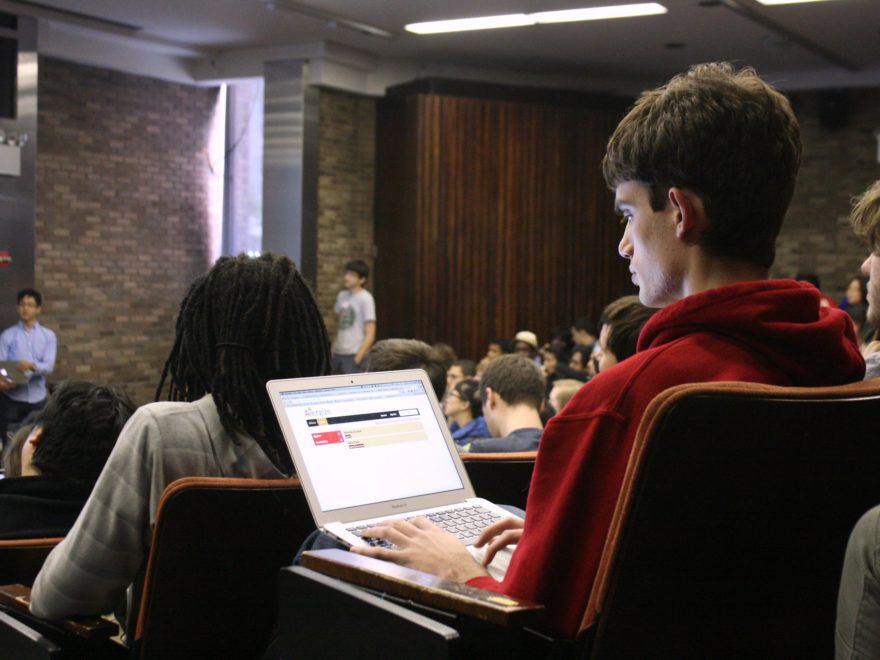 Title: Laptop multitasking hinders classroom learning for both users and nearby peers

By now, most of us have probably heard that multitasking isn’t as productive as we think and we should focus on a single task at a time. Yet, we do it anyways because we’re busy after all and have lots to do. Students in classrooms aren’t immune from this either. I’ve personally checked my email, social media, and Slack more times than I can count during class. Unsurprisingly, multitasking in class is associated with lower overall course performance. However, as today’s study will show, multitasking in class also has a negative effect on students sitting near the multitasker.

As many studies exploring how multitasking during class affects student performance have been self-report studies, the authors of today’s paper first wanted to measure the effect of multitasking in a controlled setting. For this first study, the authors recruited 40 students from an introductory psychology course. Students attended a 45-minute lecture on meteorology and all of them were told to take notes on their computer. Half of the students were then randomly chosen to complete a series of 12 tasks during the lecture. These tasks were representative of typical tasks students would do during a class such as looking up what time a certain TV show started. The students were told to do the tasks at whatever point they wanted during the lecture. During the lecture, a researcher observed the students from the back of the room, ensuring that those who were assigned the 12 tasks did try to complete them during the lecture and those that not assigned the tasks did not use their computer for anything other than taking notes.

As a follow up, the authors recruited another set of students (N=74) to take part in a second experiment. The students were split into two groups. The first group of students (36 of them) were assigned to a “distraction group” while the rest were assigned to a note-taking group. The first set of students were instructed to browse the web, check their email, or use social media while pretending to take notes on their computer while listening to the lecture from study 1. The rest of the students were then told to use paper and pencil to take notes during the lecture, as there would be a test after the lecture.

Unlike in the previous study, the students in the note-taking group were given specific seats in the room. Half of those students sat behind two students who were also taking pencil and paper notes while the other half sat behind students messing around on their computer (see figure 2).

All the students then listened to the same lecture as in study 1 and took the same test. Again, there was a researcher in the back of the room to make sure the students followed all directions.

Since the students on computers were not actually taking notes, the authors were only interested in the performance of the two groups of students who took pencil and paper notes. When comparing their notes, the authors found that the notes were of the same quality. However, when looking at the scores on the test, the authors found that students who had sat behind students messing around on their computers scored 17% lower than students who had sat behind students actually taking notes (figure 3). As in the first study, both groups of note-taking students performed better on the recalling-a-concept questions.

For this second study, the researchers also asked the note-taking students sitting behind students on their computers how distracted they felt and how much they thought it impacted their learning. Interestingly, on a 1-7 scale with 7 being very distracted, the mean response was 3.3, corresponding to somewhat distracted. Similarly, on a 1-7 scale with 7 being definitely hindered my learning, the average response was 2.7 or barely impacted my learning, even though those who sat behind the students on computer scored 17% lower on the test.

Unsurprisingly, students who multitasked during the lecture performed worse on the test. More recently, another team of researchers extended this study by conducting it in an actual classroom and tracking student web activities, again finding that multitasking resulted in lower course performance. Perhaps more surprising though is that simply sitting behind someone who is multitasking resulted in the same decreased performance as multitasking. Thus, while students may see multitasking during class as their personal choice, this study suggests that their actions also impact the learning of other students nearby.