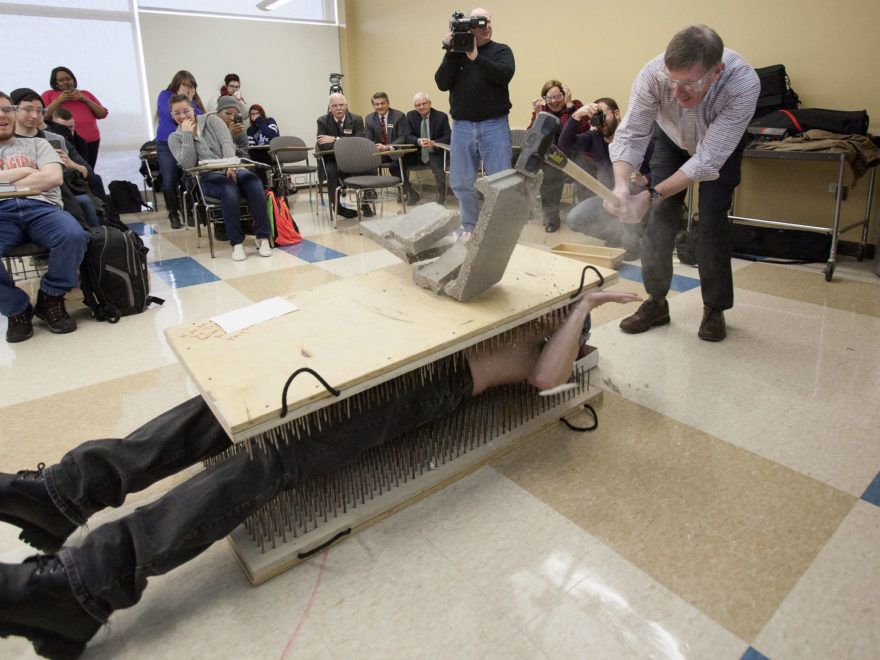 Title: Comparing the effectiveness of online versus live lecture demonstrations

Demos were one of my favorite parts of physics class. I remember one centripetal force demo where the instructor swung a bucket of water around his head, showing the water didn’t spill until he stopped swinging it. At that point, the water came crashing done, soaking all of his clothes.

While demos can be fun, they may not be as effective as we think in promoting student learning and can instead lead to increased confusion. For example, the students may not pay attention to what the instructor intended or may misinterpret what the demo shows . After all, demos are only effective if the students make the correct observations, which can be especially challenging for novice physics learners.

In addition to possible issues on the learning side, demos can present many practical challenges. For example, many demos require specialized equipment or set-ups that can limit how many demos can be purchased, how many demos can be done in class, or even whether there is space for the demos. Further, many introductory physics classes where demos are typically done are taught in large lecture halls, which can make viewing the demos difficult for all students.

To remedy some of these issues, the authors of today’s paper suggested performing some demos virtually instead of live. By doing video demos, most of the practical limitations are removed and annotations and animation can direct students’ attention to the relevant features of the demonstration. When swapping a live demonstration for a video demonstration, the authors found that students enjoyed the demo just as much, but actually learned more.

To perform their study, the authors selected a first-semester, introductory physics course at Harvard University with 110 enrolled students. The authors then selected two demonstrations during the semester to convert to videos. The first demo was the “shoot the monkey” demo where a projectile is aimed at a suspended stuffed monkey. When the projectile is fired, the monkey drops and the projectile strikes the monkey during its fall. (Figure 1; link to live version from Harvard)

The second demo, which occurred a few weeks later in the class, was the “high road, load road” demo where two balls start at the same height and then race to the end of the track. One of the balls descends an additional amount (hence traveling farther but speeding up) and wins the race. (Figure 2; link to live version from NCSU)

The students were randomly split into two groups. The first group saw the shoot the monkey demo live and the high road, low road on video and the second group did the opposite. The instructor presenting the demonstration live followed the same script as the video and took the same amount of time (to ensure there are no effects from extra content coverage or time spent on the activity). To account for the annotations such as coordinate vectors in the video and multiple trials, the instructor performing the demonstration live wrote on the chalkboard or used wooden arrow props.

After the demo, the students wrote what they observed during the demo, rated how much they enjoyed the demo on a 1-5 scale, and answered a 5-item conceptual test about the demo.

When thinking about the results, it is important to note that the videos were not simply recordings of the live demonstrations. Instead, they featured many annotations that added the trajectory, the forces, and other relevant features. In addition, the videos allowed the student to see the results of many trials. For example, the students could see that aiming above the monkey causes the projectile to miss while the students who saw the demo live had to take the instructor’s word for it.