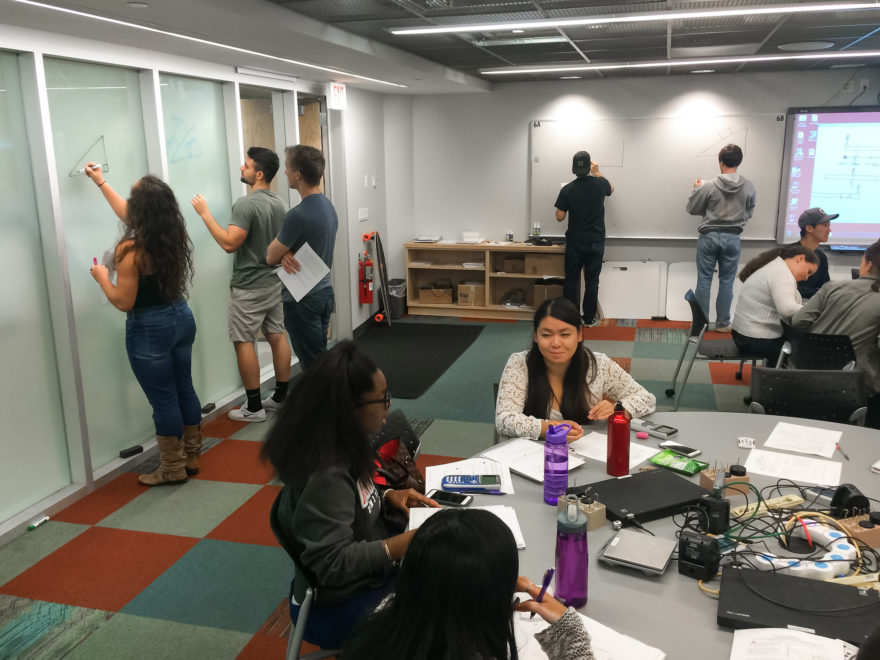 Traditionally, approaches to combat disparities in performance have tended to occur outside of the classroom. These include supplemental instruction, often with a teaching assistant or advanced undergraduate students, bridge programs and comprehensive support programs, and psychological interventions to provide emotional support. While these approaches are successful to a degree, a valid question is why interventions to close performance gaps occur outside of the classroom (often through an opt-in model) rather than inside the classroom where all students could participate. Given that active learning has been shown to increase students’ grades and reduce failure rates, the authors of today’s paper wondered if active learning could also reduce the performance gap between racially underrepresented and overrepresented students. With some caveats, the answer seems to be yes.

To conduct this study, the authors analyzed the results of many studies which had previously tried to answer this question (a meta-analysis) and looked for a general trend. For a study to be included, it needed to compare either the exam scores or passing rates of an active learning STEM course to an otherwise identical lecture STEM course. In addition, the results needed to be reported for both underrpresented and overrepresented students or by student’s socioeconomic status. When searching for studies that met all of these criteria, the authors found 15 studies that compared exam scores and 26 studies that compared passing rates, together representing 225 separate STEM classrooms and over 50,000 students.

To analyze their results, the authors combined students from racially or ethnically underrepresented groups or low socioeconomic status into a single group called minoritized groups in STEM (MGS) as it is common in the literature and this group is often of highest interest to science policy experts.

When comparing exam scores, the authors found that the gap between students from minoritized groups in STEM and students not from minoritized groups in STEM shrunk by 33% in active learning courses compared to lecture courses (a 0.62 standard deviation gap in lecture courses and 0.42 standard deviation gap in active learning course; see figure 1).

When reading the results, you may have noticed that the reduction in the exam performance gap is relatively small, corresponding to only around 0.2 standard deviations or a small effect size. However, average grades for students from minoritized groups in STEM in introductory STEM courses tend to be between 2.0-2.4 on a 4.0 scale while minimum passing grades are often between 1.5-1.7. Thus, even a small boost in grades can mean the difference between passing a course and continuing onto the next course in the sequence or failing the course and possibly failing out of the program.

Overall, the results of this study of studies suggests that active learning can decrease gaps on exams and passing rates between students from minoritized groups in STEM and students from non-minoritized groups in STEM. However, the implementation matters and the greatest decreases in the gaps come from courses with high-intensity active learning.

So what does high intensity active learning look like? The authors lay out two broad elements, which they call the heads and hearts hypothesis.

First, the authors suggest the course needs to include deliberate practice, which emphasizes highly focused efforts geared toward improving performance, scaffolded exercises in areas students may not yet have the relevant skills, immediate feedback, and repetition. These are all represented in the best practices for active learning.

Second, the authors emphasize inclusive teaching, which includes treating students with dignity and respect, communicating confidence in students’ abilities to meet high standards, and demonstrating a genuine interest in students’ intellectual and personal growth. Together, the authors claim that these two elements are required for any active learning class that seeks to reduce the performance and passing rate gaps.