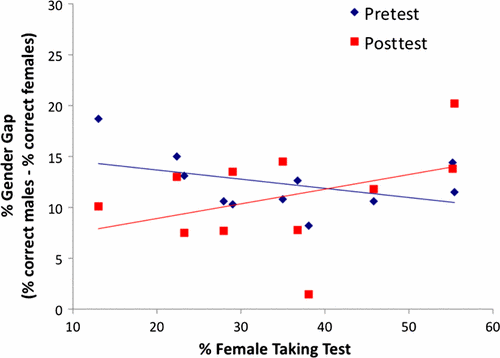 While today’s article is a few years old, it raises some important questions for researchers and instructors that still haven’t been resolved: namely, why do men outperform women on conceptual inventories (“the gender gap”)? Conceptual inventories are highly studied tests used to determine whether a student understands a concept and are key tools in physics education research and in comparing different teaching methods such as active learning and lecturing. However, many studies at many institutions around the world have found that men outperform women on these tests. For example, men tend to score 13% higher on pre-tests (given before instruction) and 12% higher on post-tests (given at the end of the semester) than women do on mechanics (forces and energy) conceptual inventories (Figure 1). On the other hand, men score 3.7% higher on pre-tests and 8.5% higher on post-tests than women do on electricity and magnetism (E&M) conceptual inventories. The goal of today’s paper is to explore what factors may be influencing this gap.

So what did they find? Well, it turns out that the evidence is rather inconclusive.  When considering background and preparation, one study found that between 70% of the gender gap on a post-test mechanics assessment and 62% of the gender gap on a post-test electricity and magnetism conceptual inventories could be accounted for based on differences in men and women’s math scores (determined from the ACT, SAT, or a math placement exam) and their performance on the pre-test. However, other measures of preparation and background such as years of high school physics or calculus and high school grade point average were not found to contribute to the gender gap. On other hand, a different study grouped male and female students based on their pre-test score on a mechanics conceptual inventory found that there was no gender gap between male and female students in the same group on the post-test.

At this point, you’re probably thinking, “well if one inventory showed a gender gap and the other didn’t, maybe something is wrong with the tests themselves and the tests somehow favor males.” This was the next area the researchers looked and but found this not to be the case. One study rewrote a mechanics conceptual inventory to include more feminine and everyday contexts but found no significant difference in the women’s performance compared to the original mechanics conceptual inventory. While the men did perform better on some questions and worse on others, the overall effect was that the gender gap was unchanged. In addition, one study found that three items on a mechanics conceptual inventory were substantially biased for or against women, but even when these items were removed, the gender gap was still present. Finally, the researchers considered that maybe women answer the questions based on their beliefs while men may answer  the questions based on how they think a “scientist” would answer. While this may contribute to the gender gap, the authors conclude it only accounts for a small part at most.

The last area the researchers investigated to try to explain the gender gap was the presence of stereotype threat. For example, maybe asking women to indicate their gender caused them to recall stereotypes of women being bad at math and science and that caused them to perform worse. However, there was no definitive pattern in the gender gap based on how gender information was collected (before the test, after the test or from a university database). To account for the strength of the stereotype threat, the researchers looked at how the gender gap varied with the fraction of the students taking the test that were women (Figure 2). They found no significant relationship on either the pre- or post-tests. Finally, value affirmation exercises have been used to try to combat stereotype threats and while one study found these to eliminate the gender gap on a mechanics conceptual inventory, a study in subsequent semesters found the gender gap to still be present.

In terms of classrooms and research, the authors note that instructors should work to eliminate the gender gap but there is no simple way to do so. Regardless of the gender gap, the authors say that conceptual inventories are still valid to use but that caution should be used if the inventories are used to compare teaching methods and the differences in scores are not large. From a research perspective, the authors stress the need for more replication studies to see which factors influence the gender gap. They also stress that the gender distribution of a class could impact studies comparing the effectiveness of different teaching style since men do outperform women and a higher fraction of women in the course could lead to a conclusion about a teaching method different from the conclusion reached if there were a higher fraction of men in the course.