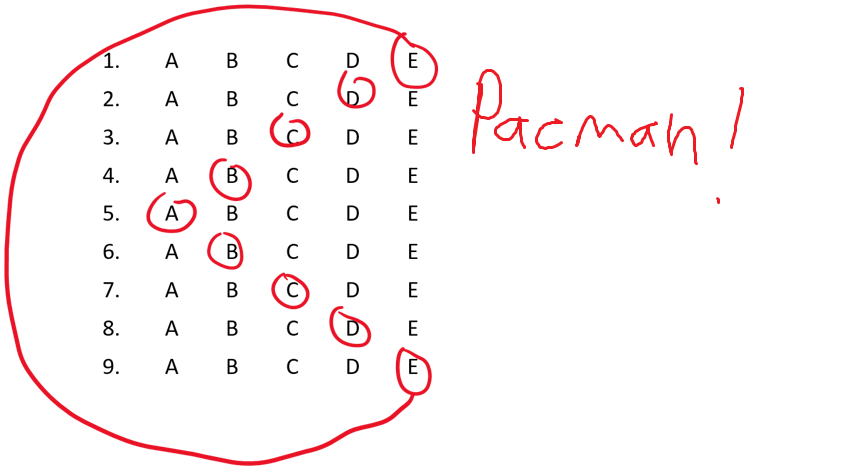 The authors of today’s paper laid out three possible tests. First, they added additional criteria to a technique used in a previous study, which they referred to as the pattern recognition test. If a student were not taking a test seriously, they may leave most of the questions blank, provide the same answer multiple times, or create some pattern in their responses. For example, the authors considered eight or more instances of the same letter response to be indicative of not taking the conceptual inventory seriously. For the patterns, the researchers considered 3 instances of ABCD, 2 instances of ABCDE, or 1 instance of ABCDEDCBA to be indicative of the student not taking the test seriously. For all of the conceptual inventories the authors would later apply their tests to, none of the these patterns would appear if the student answered most questions correctly.

Second, the authors defined a test called the uncommon answer test. Conceptual inventories are designed to test how much students have learned and hence, contain distractor answers that sound reasonable. For example, suppose there is a question in which a ball is thrown straight up in the air and then comes down and the student is asked to find the acceleration when the ball is at its highest point. Since the ball is momentarily at rest at its highest point, the student may think the acceleration is zero since the ball isn’t moving. Therefore, a common incorrect answer would be the acceleration is zero instead of 9.8 m/s2 (assuming we are on Earth). However, not all of the possible answer choices will be picked by a lot of students. If a student were to pick multiple of these uncommon answers, it is possible that the student is not trying their best. To make this test quantitative, the authors decided that if a student picked at least 3 or 4 uncommon answers out of a set of 9 questions where most of the other students picked between only 2 or 3 of the possible responses, that student may not be taking the conceptual inventory seriously.

To see how well their tests could identify students who may not be taking the conceptual inventories seriously, the authors simulated responses from 20,000 students as if they were randomly guessing on each question. If the tests worked as intended, all of these simulated students should have been found to be not taking the conceptual inventories seriously.

In contrast, the easy questions test identified at least 40% of the simulated students as not taking the conceptual inventories seriously. However, there was not a large overlap among the three tests, as the largest percentage of students identified by all three tests was 0.2% on the CSEM. Since there was the less amount of overlap between the pattern recognition test and the other two, the authors decided that a non-serious student is one who fails either the pattern recognition test or the uncommon answer test and the easy question test. Under this decision, the overall estimated percentage of students who did not take the conceptual inventory seriously is between 1.5% and 2.2%.

As the uncommon answer test and the easy question test were the only tests to identify the simulated students as not trying, the authors wanted to see how the threshold for the tests may change the results. For example, the authors had originally picked 3 or 4 uncommon answers as the threshold for not giving a serious effort. When looking at figure 3, it appears that this was a reasonable choice. For each of the conceptual inventories, most of the simulated students would fail the uncommon answer test at this threshold while very few of the actual students do.

On the other hand, the threshold for the easy questions was likely too low as around 40% of the simulated students would not have failed the easy question test simply by randomly guessing an answer (figure 4). As the authors note, this results in an underestimate of the number of students who may not be taking the conceptual inventories seriously.