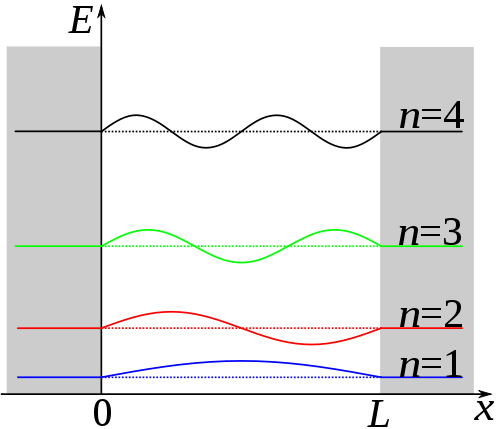 I probably don’t need to try too hard to convince you that quantum mechanics is a difficult subject and its results often seem to contradict our real-world experiences, from cats that are dead and alive to particles interfering with themselves. Nevertheless, quantum mechanics is a standard part of the physics curriculum and is essential to understanding today’s cutting edge experiments. As may be expected with physics that contradicts the students’ real life experiences, students encounter many difficulties with quantum mechanics. Today’s article focuses on student difficulties with and ideas around measuring the energy of quantum states.

Let’s assume that we have a particle in a box since that is probably the most common system discussed in quantum mechanics classes. Unlike in classical physics, a particle in a box can only have certain allowed energy states. To find these, we have to find the eigenvalues of the Hamiltonian, which in simple terms, means finding a special set of numbers of the function that describes the total energy of the system. In quantum mechanics, quantities are probabilistic until they are measured. This that until we measure the energy of a particle, we have to describe it as a sum of its possible states. For example, if there are two possible energies for a particle, state 1 (which we’ll call φ1) and state 2 (which we’ll call φ2), we would describe the particle as φ=c1*φ1+c2*φ2, where φ is called the wavefunction. The coefficients are related to the probability of measuring that energy. Since the probability must be one, the absolute squares of the coefficients have to add to 1. We use absolute squares since the coefficients can be complex numbers.

Back To The Research

To understand student difficulties with measuring the energy of a quantum state, the researchers administered a series of relevant questions to sophomore students in a spin-first quantum mechanics class, to juniors in a two-semester traditional quantum mechanics course, and to graduate students during the first week of their quantum mechanics course. Questions were generated through discussions with students and by examining student responses to homework and exams. The researchers then identified difficulties that appeared in a wide variety of questions and in different contexts. Three of these questions and their variations were then analyzed for this study. By using multiple variations, the researchers could ensure that the difficulties were related to the concepts rather than the presentation or context of the question. The three questions are shown in figures 2-4.

The difficulties spanned five areas. First, many students did not understand the relation between the wave function (the φ) and the possible energy values. Some of these errors were related to finding the probability of measuring a certain energy from the wavefunction. For example, around 15% of the sophomore students took the coefficients to be the probabilities instead of the square of the coefficients. Further, both sophomore and junior students thought that an imaginary coefficient means that the corresponding energy cannot be measured, that is, only real parts of the wavefunction can be measured. Determining the energy by measuring it a second time seemed to be even more challenging however. For example, on question 2B, 45% of the junior quantum mechanics students thought that measuring the energy a time after initially measuring it could result in a different value of energy. One student thought this was possible because

The particle is described by a wave function with elements in both eigenstates. Although a measurement of energy collapses it to one, the possibility of the other still exists, so a second measurement could get the other [energy].

Thus, even though the student understands the wavefunction “collapses” to a single energy, they incorrectly believe the other states are still possible.

Third, many students tried to use irrelevant, outside knowledge to answer the questions. For example, around 10% of the sophomore students thought that lower energy states were more likely to be measured because in classical physics, particles are more likely to have the lowest possible energy. In quantum mechanics however, the probability is entirely determined by the coefficients in the wavefunction.

When answering problems about subsequent measurements, around 10% of the juniors used conservation of energy to justify why the energy had to be the same. One junior said

Since no energy was added or subtracted [during the measurement], there MUST be the same E due to the law of conservation of energy

This line of reasoning was also observed in graduate students.

Fourth, many of the students tried to attribute the time evolution of the wavefunction to something other than the Schrodinger equation. For example, many students engaged in some type of decay reasoning, in which they believed that whatever state was observed would decay to the ground state after enough time passed. The researchers believed that this belief comes from students incorrectly applying the ideas of spontaneous or stimulated emission. Other students  (~20%) engaged in some type of “revival reasoning” in which the wavefunction returns to its initial state after a measurement is made. This idea also appeared on question 3C when the perturbation was removed: students believed the particle would return to its initial state once the perturbation was removed. Finally, some students engaged in “diffusion reasoning” in which they believed that after a measurement is made, the wavefunction will eventually consist of an equal superposition of all available eigenstates.

Finally, many students do not relate the Hamiltonian, which describes the total energy, with the possible energy values. On question 1B, some students incorrectly claimed that the probability of measuring each energy is independent of time because the potential and Hamiltonian are time independent. Alternatively, on question 3C, around 30% of the juniors incorrectly thought that the original square well energies could be measured while the perturbation was present, not realizing that the perturbation changes the Hamiltonian and hence the allowed energies. In addition, of the students who realized the perturbation does change the energies, around half of them thought it took the particle time to “feel the effects” and hence won’t change to the new energies for a little while. This belief was also found among graduate students who on a problem similar to question 3, thought that if the potential were changed from an infinite square well to a harmonic oscillator, the particle would remain in its initial energy state until the particle felt the effect of the change.

Even after instruction and multiple courses on quantum mechanics, many difficulties still remain. Today’s paper touches on five broad categories related to measuring the energy of a quantum state: understanding the relationship between the wavefunction and the energies, overapplying the idea of stationary states, bringing in irrelevant outside knowledge, not understanding that time dependence is determined by the Schrodinger equation, and not realizing that the Hamiltonian determines the possible energies. Work such as this one is essential since most PER studies are focused on introductory courses rather than upper division courses such as quantum mechanics.