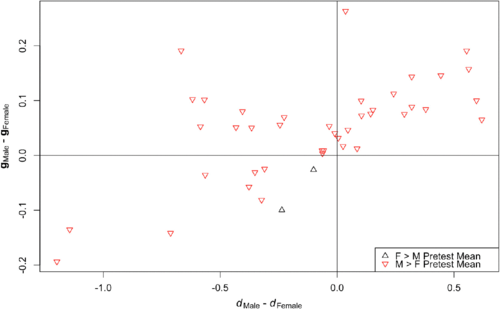 Measuring student learning is a complicated but an important part of physics education research. Typically, this has been accomplished by comparing pre- (start of semester) and post-test (end of semester) scores on conceptual inventories. To compare the results from different instructors and different semesters, the scores are typically standardized using the normalized gain, which we introduced in the previous PERbites post. Essentially, the normalized gain is the fraction of “knowledge” gained on average to the highest possible amount of “knowledge” that could have been gained. The formula is shown in figure 1. Previous work has found that inferences based on the normalized gain may lead to incorrect conclusions about gender inequality in STEM courses, meaning that another “gain” statistic may not reach the same conclusion. In today’s paper, the authors examined whether using normalized gain or Cohen’s d, a gain statistic commonly used in the social sciences and education research, could lead to different inferences about student learning as measured by conceptual inventories in physics classes.

The researchers then removed students and classes that did not provide reliable data such as students who completed the test too quickly to have actually read all the questions, students who skipped more than 20% of the questions, students whose gain was two standard deviations below the class gain since this means the student would have to substantially unlearn the material while taking the course, and classes where less than 60% of the students completed the test. To account for the non-complete data set, the researchers then a technique called multiple imputations to simulate the missing values based on the rest of the data. This technique involves predicting the missing values in the data set, running the analysis, and then repeating a number of times before combining the results together using averages and other methods designed to combine the results of multiple experiments.

So what can we take away from this paper? First, the normalized gain overestimates student inequities and should not be used in research studies. Instead, researchers should use Cohen’s d. This is especially important when studying students who may come from disadvantaged backgrounds since they are likely to have lower pre-test scores than students who come into the class with better preparation and hence will appear to have learned less than their more advantaged peers as measured by the normalized gain. Second, as instructors at teaching intensive institutions are often required to provide evidence of student learning for tenure and promotion, using the normalized gain may result in scores that appear to show less learning than actually occurred. While whether ’tis nobler in the mind to use Cohen’s d is an open question, this paper shows that the normalized gain is a statistic biased towards students with higher pre-test scores and its use should be replaced by Cohen’s d.